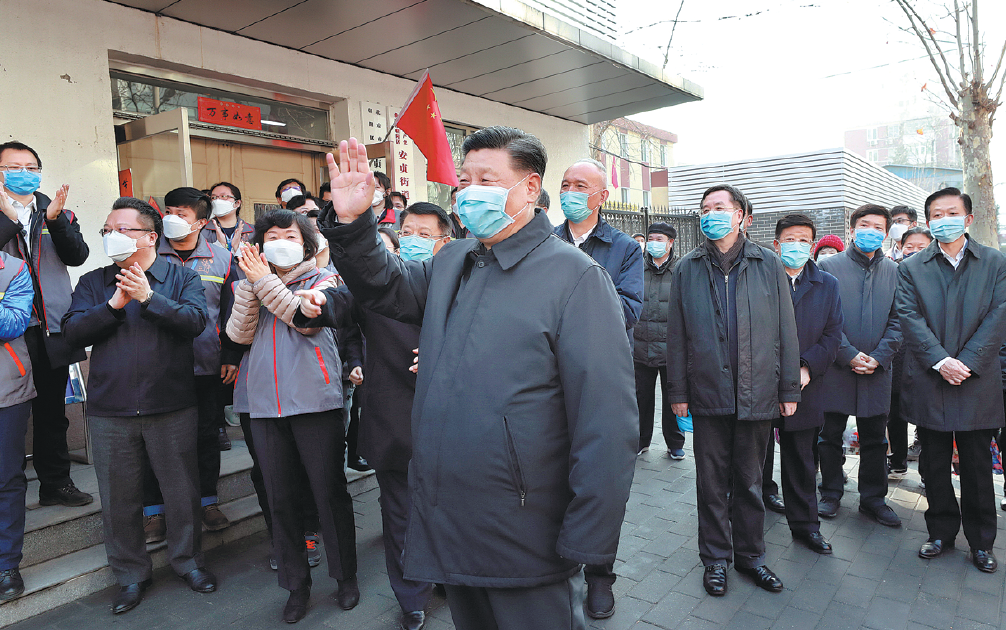 President Xi Jinping, who is also general secretary of the Communist Party of China Central Committee and chairman of the Central Military Commission, greets residents during an inspection of novel coronavirus pneumonia prevention and control work at the Anhuali residential community in Beijing’s Chaoyang district on Monday. PANG XINGLEI / XINHUA

President Xi Jinping urged redoubled efforts, firmer resolve and more decisive measures on Monday to curb the spread of novel coronavirus pneumonia in order to win the battle against the epidemic.

Xi, who is also general secretary of the Communist Party of China Central Committee and chairman of the Central Military Commission, made the remark while inspecting NCP prevention and control work in Beijing.

Xi visited the Anhuali residential community in Chaoyang district, where he learned about prevention and control at the community level and the supply of daily necessities. He chatted with residents and community workers and gave them his regards.

Xi stressed the importance of community-based control of the contagion, and called for detailed prevention and control measures to be taken in communities around the country.

During a visit to Beijing Ditan Hospital, designated for treating NCP, Xi learned about the treatment of infected patients there, and made video calls to hospitals receiving infected patients in Wuhan, the epicenter of the outbreak, in Hubei province.

He greeted medical workers on the front line, reminded them to protect themselves and asked them to make every effort to improve admission and recovery rates and lower infection and mortality rates.

On behalf of the CPC Central Committee, Xi spoke of his sorrow for those who died from NCP and expressed deep sympathy to their bereaved families. He also extended sincere sympathy to the patients and their families.

In a video conference with the central guiding team in Hubei and the provincial headquarters for prevention and control of the epidemic, Xi stressed that the NCP situation is still grave.

Wuhan and Hubei province remain the top priority in the epidemic control efforts and hold the key to final victory in the fight against the virus throughout the country, he said.

Xi urged utmost efforts to admit infected patients, optimize diagnostic and treatment plans and uphold social stability by strengthening social governance and properly dealing with the problems arising in the process of disease prevention and control.

He called for timely release of authoritative information related to the disease in order to address public concerns in an open and transparent manner.

Xi also underscored the need to promote education regarding laws on contagious diseases and related knowledge among the general public to guide them in enhancing law-based prevention and control work, and to help them improve their awareness and capability for self-protection.

Noting that some medical workers were infected while working and even sacrificed their lives, Xi said special attention should be given to caring for front-line medical workers and helping them solve problems they are facing.

Xi said epidemic control is a grave battle that matters to people’s safety and health, and he urged Party officials and members to shoulder their responsibilities and carry out the policies and measures of the CPC Central Committee in their entirety.

Xi also went to the Chaoyang district’s center for disease control and prevention, where he learned of the district’s efforts in emergency response, epidemiological investigation and screening reports as well as the city’s overall epidemic prevention and control work.

He said the NCP epidemic is a major test for the country’s emergency response capability. It demonstrates the advantages of China’s system but also reveals weakness in the emergency response system, he said, adding that fundamental efforts should be made to intensify the modernization of the system and enhance the training of personnel.

Speaking at a meeting at the center for prevention and control work in Beijing, Xi urged tireless efforts to prevent transmission of the contagion from other areas to Beijing and to curb the spread of the disease in the capital.

It is urgent to take tailor-made measures to prevent the spread of NCP through large population flows after the Spring Festival holiday, he said, stressing the importance of identifying, reporting, isolating and treating infected patients in a timely manner.

Xi urged stronger measures to uphold social stability and normal operations of the city, and crack down on criminal activities, such as using the epidemic as an excuse to hike prices.

Xi stressed that while preventing and controlling the epidemic, coordinated efforts should be made to keep employment, the financial sector, foreign trade, foreign and domestic investments and expectations stable.

The nation should have firm confidence that the general trend of China’s economy in maintaining sound development in the long term remains unchanged, he said. Despite momentary problems and challenges, Xi called for reducing the epidemic’s impact on the Chinese economy to the minimum and striving to complete the socioeconomic tasks planned this year.

NCP had claimed 908 lives with 40,171 cumulative confirmed cases on the Chinese mainland as of Sunday.

Twenty-seven foreigners living and working in China had been confirmed to be infected with the contagion as of Monday morning, with two deaths, three recoveries and 22 undergoing treatment in hospitals, the Foreign Ministry said on Monday.

Xinhua contributed to this story.