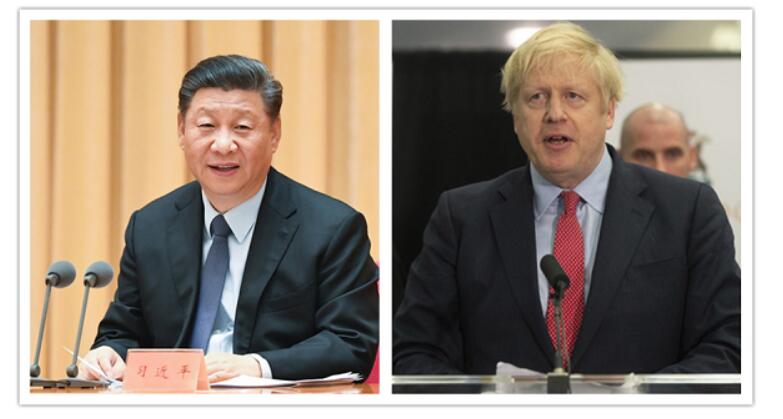 Xi said that China has confidence and capacity to achieve this year’s targets for economic and social development.

In the phone call, Xi expressed his gratitude to Queen Elizabeth II and Johnson for their sympathies with China’s fight against the COVID-19 epidemic, noting that Britain has offered China supplies in support of the fight, which demonstrates the friendship between the two countries and the two peoples.

Since the outbreak, China has always prioritized its people’s safety and health, given full play to its institutional advantages, mobilized the entire country, and adopted the most comprehensive, rigorous and thorough prevention and control measures, Xi said.

Thanks to those arduous efforts, the situation is witnessing positive changes, and China’s prevention and control measures are achieving visible progress, he added.

Now the battle against the epidemic has arrived at a crucial time, he pointed out, stressing that China will strive to reduce the impact of the epidemic while resolutely carrying out the prevention and control efforts.

Noting that the Chinese economy enjoys strong resilience, broad space for domestic demand and a solid industrial foundation, Xi said that China has confidence and capacity to achieve this year’s targets for economic and social development, especially such key tasks as securing a victory in building a moderately prosperous society in all respects and in eliminating poverty.

Upholding the idea of building a community with a shared future for mankind, China is not only responsible for the safety and health of its people, but also committed to the cause of safeguarding international public health, Xi noted.

China has made enormous efforts, and has effectively contained the global spread of the virus, Xi said, adding that the Chinese side will continue to cooperate with Britain and all other countries in an open and transparent manner.

Against the backdrop of increasing global challenges, China and Britain, both permanent members of the UN Security Council, should work together to shoulder more responsibilities and make more achievements, so as to lead the China-Britain comprehensive strategic partnership to a fresh journey in the new decade, Xi said.

He said that the two sides should grasp the general direction of the development of bilateral relations from strategic and political perspectives, stick to the principle of win-win cooperation, and accommodate each other’s core interests and major concerns on the basis of mutual respect.

He added that the Chinese side stands ready to work with the British side to safeguard multilateralism and free trade, and strengthen communication on major international and regional issues.

For his part, Johnson, on behalf of the British government and people, expressed sympathies to the Chinese people over the COVID-19 outbreak, and highly appreciated China’s comprehensive and effective measures to prevent and control the epidemic, timely sharing of information with the international community, and efforts to stop the virus from spreading on a worldwide scale.

The British side admires China’s speed and efficiency in the fight against the epidemic and stands ready to continue to provide China with support and assistance, the prime minister said.

Johnson also expressed his belief that under the leadership of Xi, the Chinese people will prevail over the epidemic and minimize its impact on the country’s economic and social development.

He added that he loves China, and stands ready to lead the new British government to work with the Chinese side to strengthen exchanges at all levels, deepen cooperation in various fields, and push for continuous achievements in the “golden era” of bilateral relations.

Britain welcomes investment from Chinese enterprises and is willing to strengthen cooperation with China within the framework of the Belt and Road Initiative, he said.

The British side stands ready to enhance coordination with China on the 2020 UN Climate Change Conference to be held in Britain and the upcoming 15th Conference of the Parties to the Convention on Biological Diversity in China, so as to jointly promote international cooperation on climate change, he added.

National Health Commission of the PRC